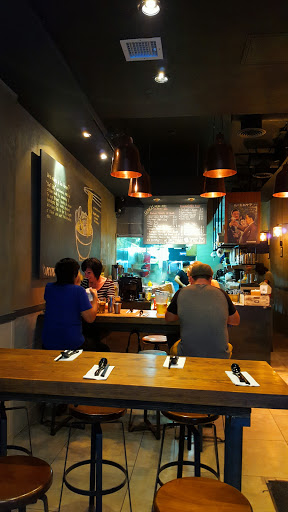 This review is based on the 2 times I have visited this restaurant in the past year. I ordered ramen on both occasions as well as my guests. About 1hr after the first visit, my guest was overcome with extreme gastrointestinal discharge, I experienced similar effects about 2.5hrs after eating. Even after this occurrence I was willing to give this restaurant another chance as I was unsure that they were the cause. Upon the first taste of the ramen, my guest (Different person than the first visit) commented that something was "off" regarding the taste of the dish. I decided that I would swap out her bowl with mine as I did not taste anything funky. This second visit resulted in the same gastrointestinal discharge that happened after the first visit except this time it can only be described as explosive! We were staying in Long Island City and I had to exit the subway system 3 times to find a public restroom before I was finally able to make it back to the hotel. I cant find the words to describe how urgent my need to find a toilet was when the discharge happened. I contemplated squatting in the subway terminal because I was afraid I would be unable to make it up the stairs without the discharge occurring in my pants. After getting back to the hotel room, my guest also starting experiencing similar issues. These issues continued for over 24hrs after eating at this restaurant. Needless to say, this put a huge damper on all the sightseeing we had planned. I ended up spending more time in and looking for public toilets than I did sightseeing. I wont be making the mistake of returning to this restaurant again and I hope this review helps others to avoid the discomfort and pain that I had.

Service was good and my bowl of ramen came out very quickly. I ordered the Okinawa Shio, not sure if it was because it was "Okinawan" style (since Ive never tried Okinawan style anything before I cant comment on the authenticity) but the skinny noodles were too firm for my taste. The broth was also too salty for me, but had very good depth of flavour and was very rich. The portions are not very big, those with bigger appetites might find themselves leaving hungry unless you also order side dishes. Update, downgraded from 3 stars to 2: Decided to try this place again to see if it was simply the menu item that I tried last time that didnt suit my tastes. This time I ordered Tonkotsu Shio, which was on their special menu. The tonkotsu umami was rather lacking, though the noodles were not as hard to chew this time. Unfortunately, service this time was severely lacking. The waitress said nothing to us and gave us no acknowledgement except to ask "anything else?" For $14 for a bowl of soup noodles, I expect both better flavour and at least a smile. Wont be coming back.

The first time I went the food was really good. I had the Kuu Ramen. The place is so small that its hard to find seating and even if you do youre pretty much elbow to elbow. The second time I went I had Beef Donburi bowl. Not enough meat to amount of rice. It was just okay. Third time I had the Spicy Ramen. Definitely not good mostly because I went at off hours. They rushed my order so much that the noodles werent properly cooked and some of the meat toppings were still cold. You can tell that they threw this together without thinking, and it just shows that the food isnt freshly prepared and comes out of a box (ramen) or the fridge/freezer (meat and toppings). Price is a bit too high for quality of food and atmosphere, but everything in FiDi is overpriced so you cant really blame them.

Its a great little spot. The service was fast and friendly. The menu is not super expansive so you dont need forever to make up your mind. It was really hot that day so I opted for a rice bowl with beef instead of my typical super spicy ramen, my gf had the original pork. We swapped back and forth a couple of times because we liked each others pick. The beef was very generous and a little sweet. The best thing about the ramen is they included the things which are add on at other places , like an egg. The downside, It was loud and super busy. I think if youre used to eating ramen, or at other Asian restaurants, youre ok with eating with strangers (plus its NY) so be ready to eat with people in your personal space. Thats ok people were on their phones anyway.

This is my new, favorite Japanese restaurant in the financial district. Great service, stellar food, clean and quaint interior. The Tokyo ramen is fantastic, as is the Tonkotsu ramen. Their pork is very, very good. The broth and noodles are impressive. Their pork buns are good, but not the best. Their sushi is very fresh, but the roll I tried (spicy tuna) wasnt amazing. Ill have to try another roll and update this review. I cant rave enough about their service. All their female waiters are so nice, but there is one waiter that could probably cheer up a bit. For those who dont eat pork, they have options that use chicken broth and chicken or beef protein.

This is a cool place to see a concert ( smaller size place more intimate setting, nice decor Napa valley winery style!). The concept of eating and enjoying good wine while watching the show is even better. However, City winery would benefit by having more wait staff. There seemed to be too many customers for the wait staff to effectively service. Our waitress was missing in action on us for the entire night but I attribute that to her having too many customers to take care of all at the same time. I would return though to see another show.

Kuu Ramen is one of my favorite places to eat! Its right by my office so Ill often go during my lunch break or stop by after work. Its a smaller restaurant but super clean and has AMAZING ramen and appetizers. My personal favorite is the miso ramen! They also have excellent sushi that is so fresh, along with all their other food. Ive dined in and taken out and its delicious either way. I recommend this spot to all of my friends and I would definitely put this ramen up against Ippudo!

Feels a little like Japan. Even though its small inside theres nice feel, like Im in a little restaurant in Japan but if you are closterphobic then you might have an issue. service was good but them getting slow when they are busy. The ramen is great, a little pricey but they give you a lot. the mizo in the tonkotsu was my favorite. The hot sake is pretty good too but I probably would only get it during happy hour. Overall a good place to take someone that has never had ramen.

My favorites are the soy chicken ramen with a little hot sauce and the spicy chicken rice bowl. Its amazing flavor for a cold winter day. My coworker got the teriyaki chicken and it had so much chicken that it was enough for 4 meals. Kuus dishes smell amazing and people are always asking about it. This is definitely one of the best additions to the Financial Districts food options. Overall, very delicious food and good service. 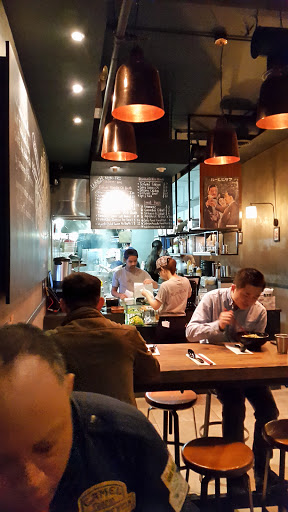 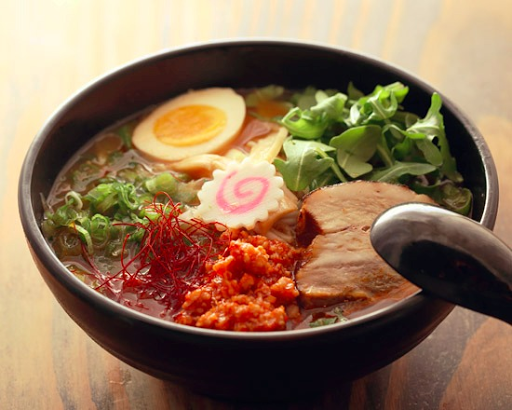 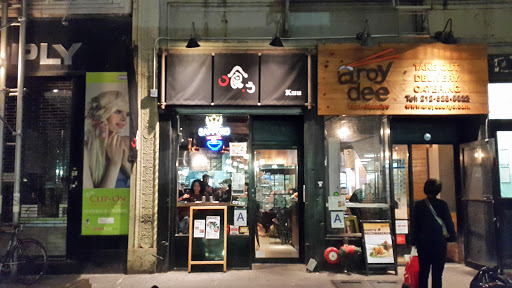 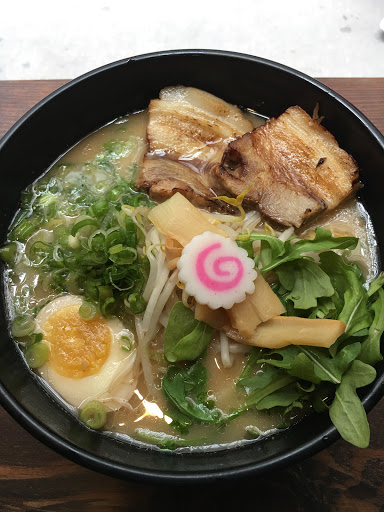 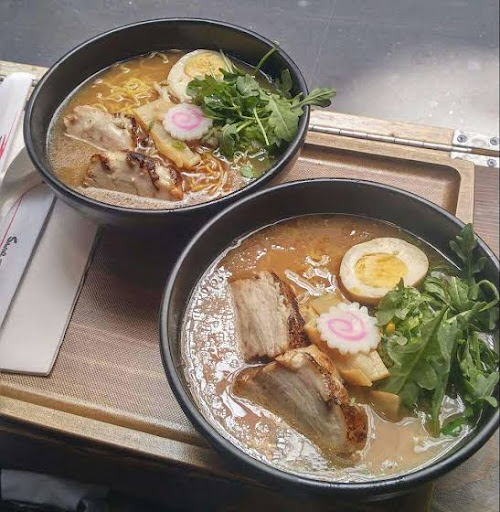 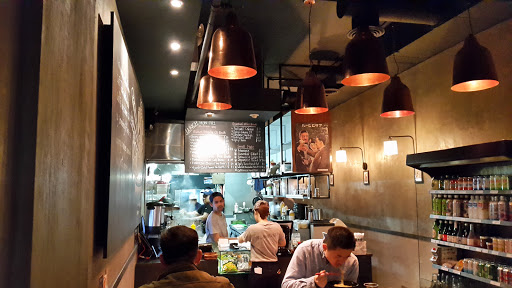 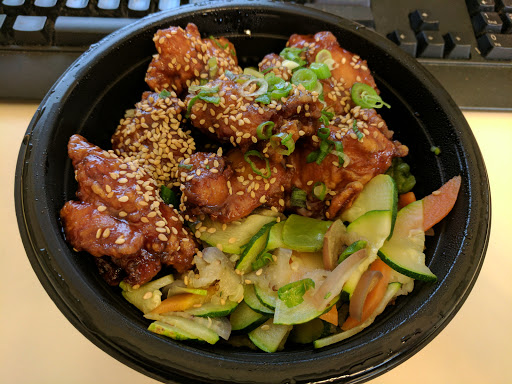 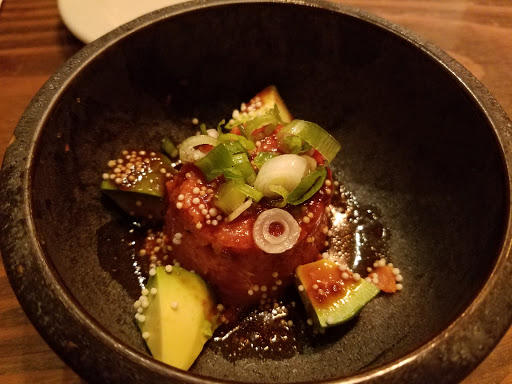 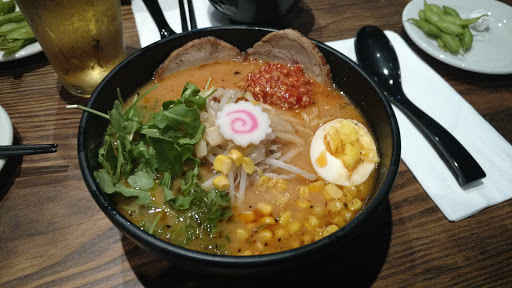 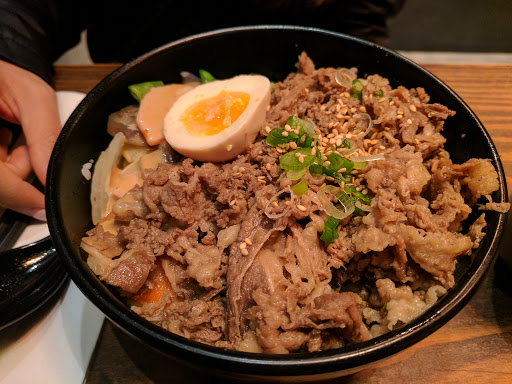 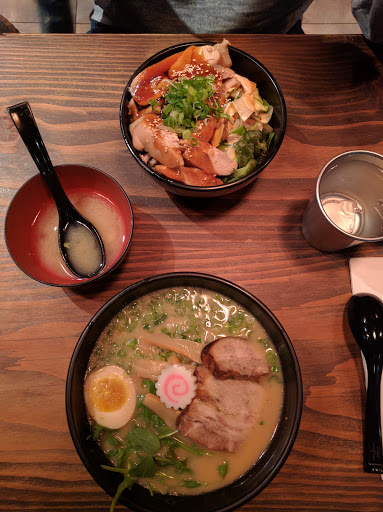 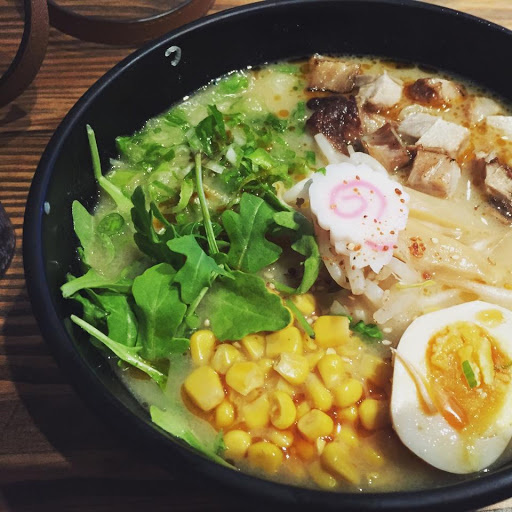 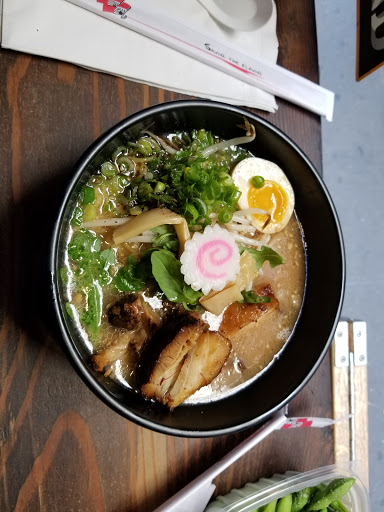 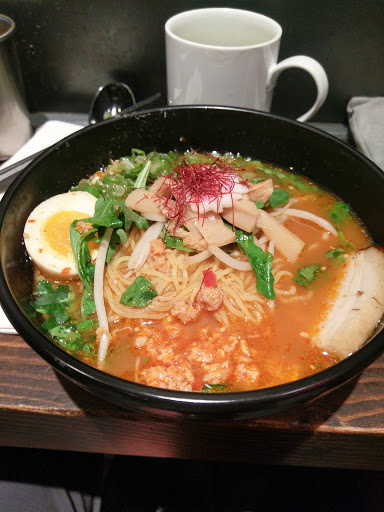 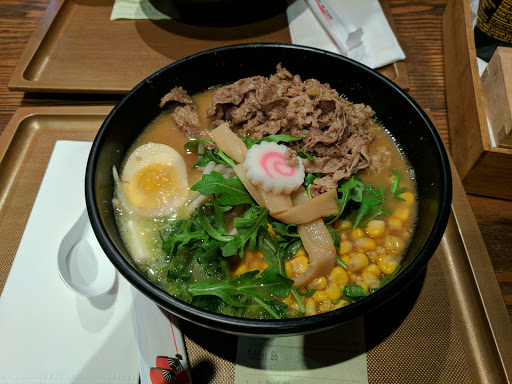 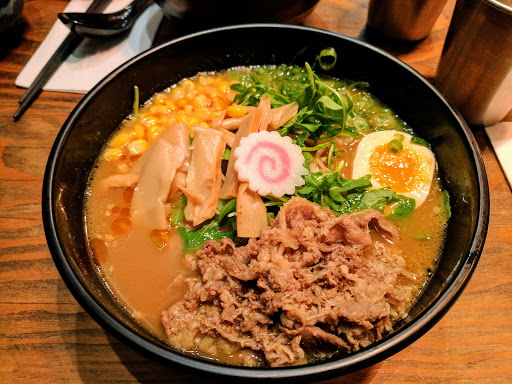 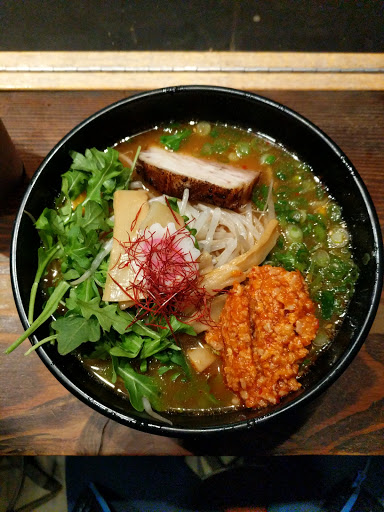 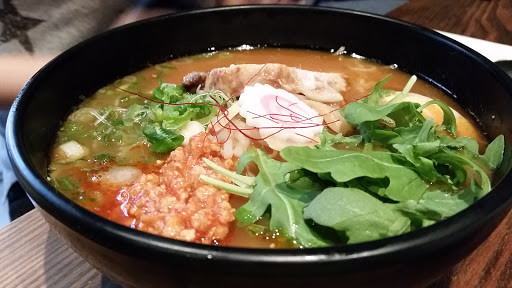 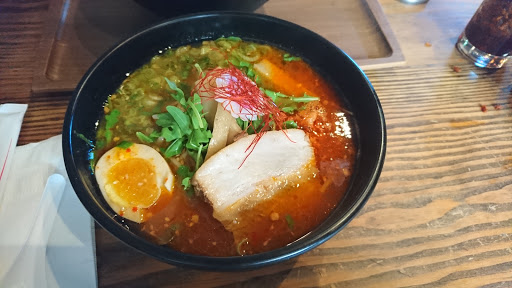 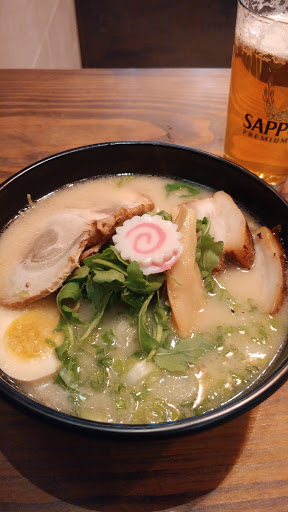 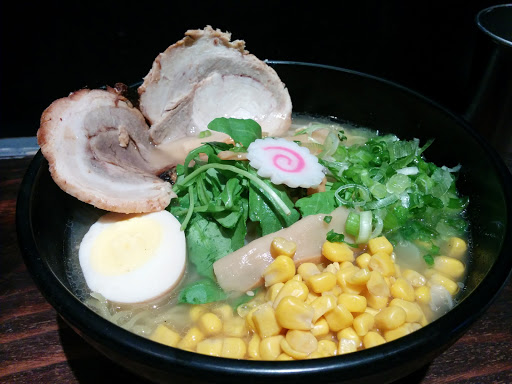 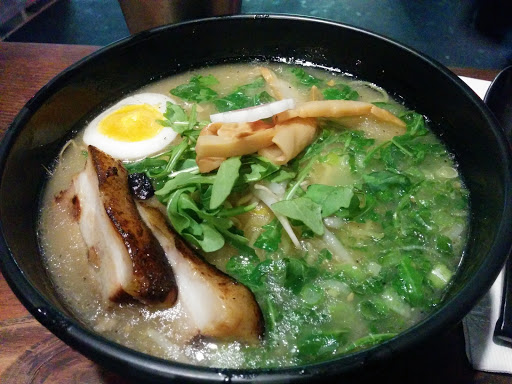 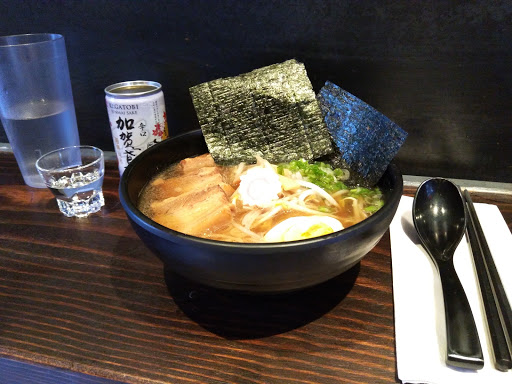