I wwent insideo and got an order to go, i purchased 20 boneless, 10 Mango Hab, 10 BBQ, 2 fries and 2 drinks. Upon picking my order up and Opening the bag I realized I was given the wrong order. I called back and was told a manager would call me back, which never happened. I called again this morning and have got the run around all morning. Ive been told 3 times I would get a call back and never did. Finally I got a call back 3 hours later telling me they couldnt replace my 24 dollar meal until they talked to the night staff. Ive been a customer for a while, and the last few times Ive ordered from here Ive had problems, but this incident tops it all. The management and staff seem highly incompetent and need a few lessons in customer service. Ill never give this location any business and I will be letting all my friends and family know to avoid this location as well

Went there and I was waiting to get my drinks filled and this other kid that seemed to work there because even though he was not in uniform he kept jumping on the counter to throw some trash away that was on the other side of the counter and the employees in uniform did not say anything to him so either he was a buddy of theirs or a employee there on his day off bumped me to get to the counter and did not say excuse me to any of the customers he was passing. Then it really upset me when an actual employee that was carrying trash bumped me and didnt have the courtesy to say excuse me or sorry. Also the music was way to loud that when the employees were yelling out customers names to get their food a lot of us didnt know whos name they said until some people would walk up and ask if their name was called.

DONT! I REPEAT DO NOT GO HERE!!! Id rather drive out of the way to the lakewood location. Ive gone here several times and it doesnt matter wat time of day or time of year they are RUDE and unprofessional not only to me but other customers while Im there every single time I go. I asked for extra crispy fries with extra seasoning I got limp fries with no seasoning, probably on purpose! Whoever does the hiring needs to get fired. Clean House!

Horrible Top 40 music blaring so loud you can hardly hear yourself think. They have a lot TVs all of them showing infomercials or the direct TV logo (no content). The staff is clearly overwhelmed, they were trying but theres too many order coming in on a Sunday. The soda machine was broken, napkins no where to be found, and food was just ok. Took about 35 minutes to get 10 wings. Not recommended. Ill never come back.

Nasty I ordered original hot and the girls working there gave me some nasty flavor super hot and had black specs on it I took one taste and threw them all away. No chance Ill ever eat there and make sure I spread the word. It was more like they mixed it wrong. The mixing bowls where dirty.They all had crusted old sauce and they reused them. The girl went from mopping to cooking without cleaning her hands. F

Freaking hated it! Worst customer service Ive ever had. All I kept getting was eyes rolled, short answers..I felt rushed. They didnt think I spoke Spanish obviously so when I got my order taken the employees kept saying rude and harsh things about me and my spouse! Im sure the manager is rude too, I wish I could let their corporate office know about this

Horrible customer service from so called manager, RAUL. Hes more likely to treat men better, being that he is gay, not to mention extremely rude and unreasonable, he refused to switch up flavors of wings and said no he couldnt do it even after I offered to pay more. Ill never go back there and give them my money.

Called in an order paid almost 60 dollars for limp cold a$$ fries and cold wings not to mention I didnt even get the amount of wings I orderd! had to call and go back for the rest and got an attitude as if Im the one who made a mistake!!! This place has cold nasty food wont be spending my money there again!!

I Ordered boneless chicken for my kids n the lady gave me bone n to top it off she was sooooooo rude Ive never had a lady roll her eyes at me while taking an order she messed up on ! N I was standing in line for like 15 for her to even notice me n when she saw me she walked away!Verrry rude customer service

I would give a half star if it was an option. Great containers, great bag, soda was awesome. They apparently cannot do math and tell you your total when you place an order over the phone, and they dont even start making the food until you show up. Wings were sub-par, will not be returning.

They mess up my order 33% of the time. Ordering online has no merit of you have to wait to have them fulfill the correct order. Will be the last time I go here, will drive slightly further to not have to go through this in the future.

Terrible. 45 minutes for wings. No condiments. They messed up the order. They were rude. There was no one else in the store. The tables were dirty. I mean, it was like they were trying to be terrible. Avoid at all costs.

Called in order, they said it would be 15 min. Got there in 20 minutes, but they had no idea about any order for me. Not only were they rude they wanted to over charge me. Worst location in denver hands down.

got some wingys for the game last week. very tasty. quick and hasty. service gonna make you wanna say hey thanks i havent been treated that nice lately, but you made me feel like an ace tee hee! -maya angelou

slow service, not correctly made and quite dirty inside, reminded me of a dive bar about to go out of business, soda machine is big and fancy but doesnt have anything in it. wouldnt stop at this wing stop. 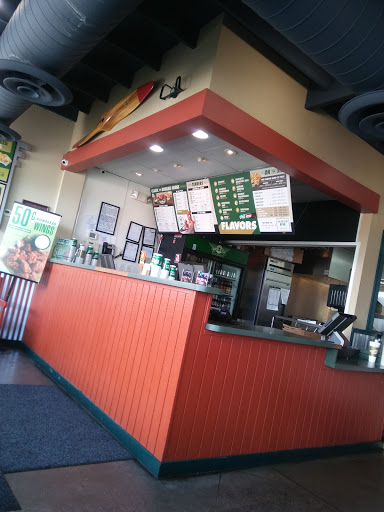 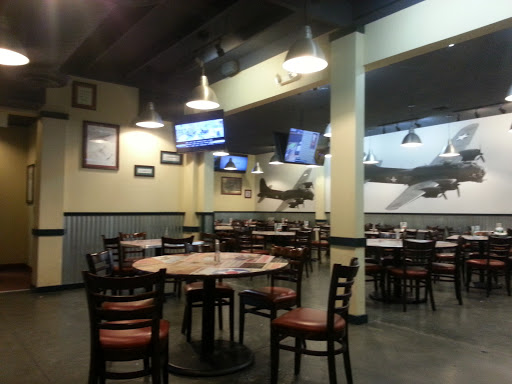 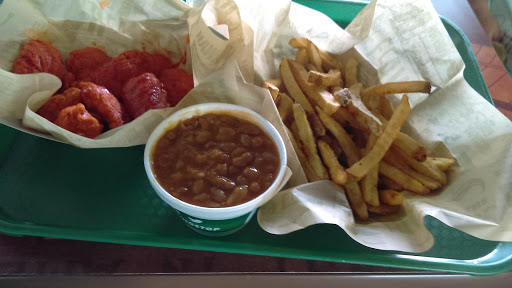 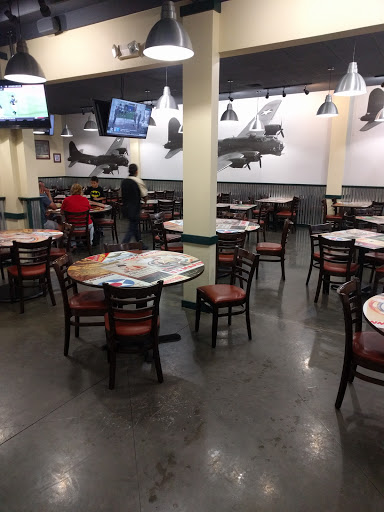 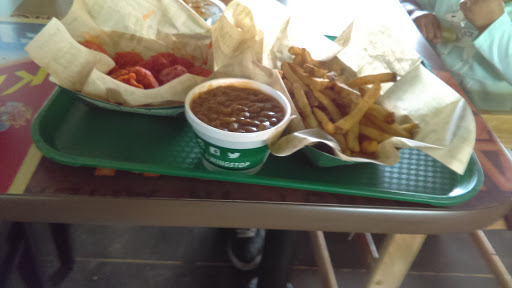 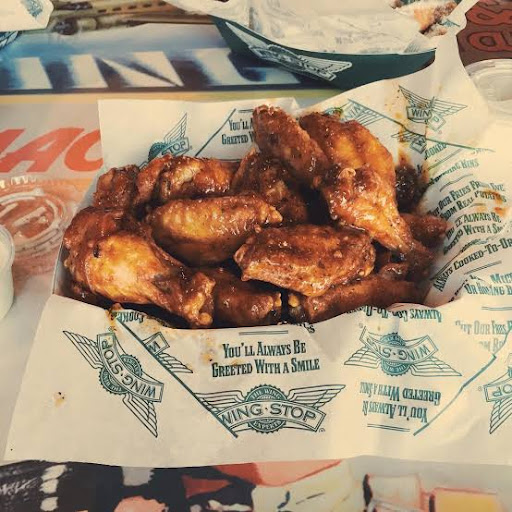 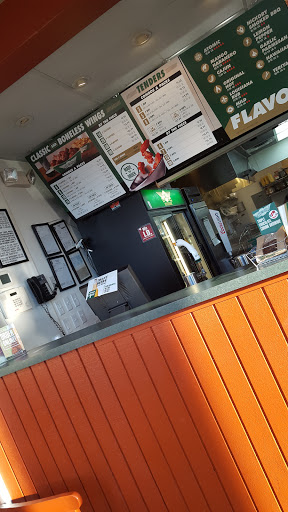 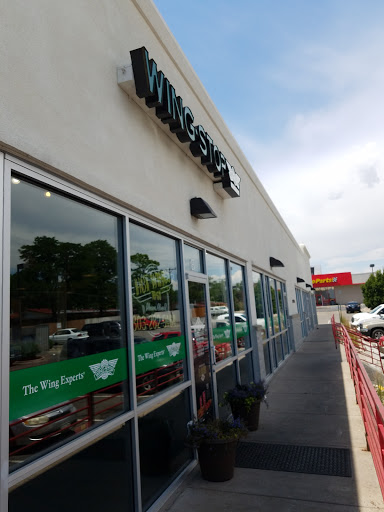 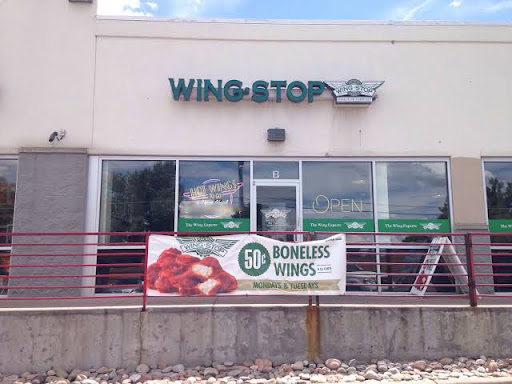 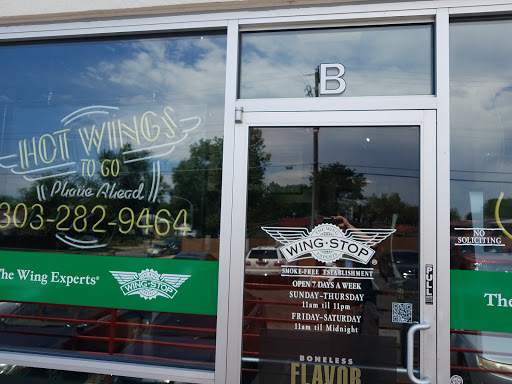 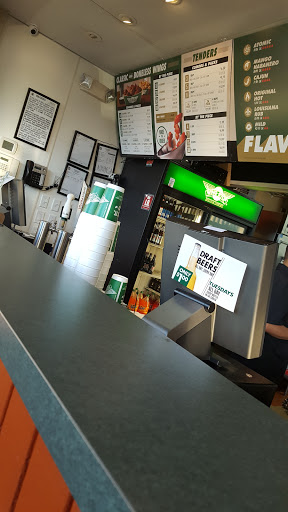 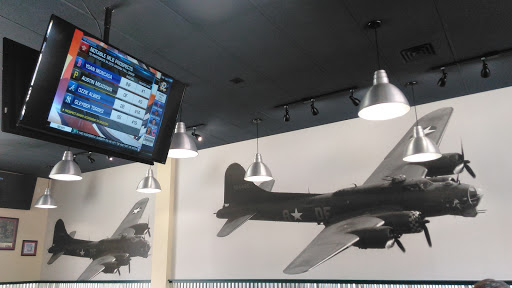 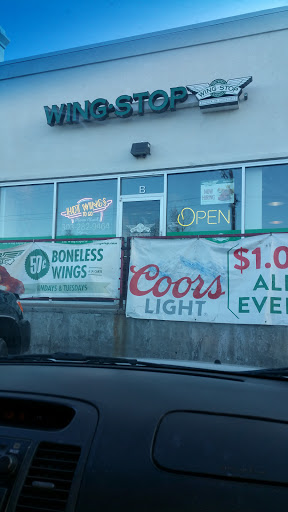