The food is dry an tasteless the ice cream is usually nasty tastes like medicine an lube that they use to put it together the chocolate fountain is never taken down they just reuse it day after day the cakes are so old they crumble the jello is slimy the banana pudding is Ok i have seen the chocolate pudding so old its green an foamy the steaks arent cut in house anymore they come in pre packaged since they have a new owner they cut so many corners its ridiculous they dont make the pizza dough in house none of the pies or donuts the milk usually is so old the cartons they are expired n they give them to people then act like they dont know the ice cream sits in the machine all night with no refrigeration they just leave it sit in the machine the equipment in the back is so old its stained up an crusty the floors are nasty and full of food the salad bar doesnt even stay cold they put ice in it to have it stay cold the soups come in prepacked so does everything else expect rolls n biscuits the smell from the dirty floors smells like garbage definitely needs a throughout cleaning DISGUSTING!

Ive come here today with my girlfriends family. Im not impressed. The biggest problem is the service. Our waitress paid little attention to our table of 6. She instead spent her time at the table next to us. Joking around and laughing with them. Standing at their table for some time before checking on her other tables. The few times she did visit our table, she was rude and short with us. -drinks left empty for several minutes -offered coffee. When asked for milk for his coffee, we waited several minutes before finally saying something to another server. Our waitress heard us, gets up to get the milk and goes straight to the other table smiling and asking them who had the milk. We had to wave her down to get what we asked for. -the bowls at the soup counter are not clean -our table when we got here was cleaned; minus the glob of chocolate fondue on the table. The waitress has short brown hair and glasses. Heavier set. I do not recommend this location to anyone. Very dissatisfied.

Expensive on weekends, which is when we went there. The higher cost is because they have prime rib, salmon, and jumbo shrimp. Those were three of the worst items on the buffet. Prime rib was gray and tasteless, jumbo shrimp was awful (I cant tell you why, it just tasted bad). Finally the salmon wasnt cooked right at all. They were swamped when we arrived. There were 4 employees at the register just standing around, chatting, and tripping over one another when they decided to help someone. There was only 1 employee seating people, so there was a line at the cash register.(yep, 4 people doing nothing behind the counter, and 1 girl seating people. Made sense to us too.) The staff behind the buffet were some of the hardest working people Ive seen at a restaurant. Running around like mad to keep up. (except for the desert buffet. it had little food, was very messy, and those employees werent doing much about it.

A friend and I were at golden corral June 20 at 12;30 pm for lunch. The staff was all teenagers that didnt care if they responded to you or not .They didnt keep the food stocked they ran out of mashed potatoes and my friend tried to ask one of the employees if they had more mashed potatoes and she walked away and totally ignored him. Their were people lined up for mashed potatoes and they never got them. Very poor salad bar. nothing on it, What was on it was low and there were very few people there because it was still early in the day . very poor set up in all. You miss a lot of things the way the counters are set up. Wont be back. And my friend didnt get his senior discount and the girl at the cash register didnt even ask. Get some adults in there so the employees can be instructed how to treat customers. Restrooms were dirty. The only decent person there was our server. For which we left a 5 dollar tip.

Went for breakfast friday April 28th 2017.OPENING Time 830 am. Me and my boyfriend was first customers there and only customers. Carpet was not swept. Under the buffet was dried food that obviously been there for couple of days from the looks of it. The desert bar had chocolate down fronts of it. Windows were very dirty. The employees most of them were on there cell phones and trying to work at the same time... And the one person who i believe was a manager or assistant manager was no better then the staff. Night staff after closing should be cleaning, wiping down the front of buffets, mopping, sweeping, doing windows and doors. And cleaning bathrooms stocking toilet paper and hand towel saop. Atleast thats how its been every place i have ever worked. Wish management would make there employees do all these things would be a better place to eat.

Me and my family of four went to the Golden Corral in Belden Village tonight. Our servers name was Katie she did a magnificent job she made sure everything was taken care of and her entire section was clean. The food was good I was a little surprised that they switched from Pepsi products to Coke products and that they dont offer a wide range of drinks for children they only have lemonade or pink lemonade. For a family of four it cost us $55 and we had one child 3 adults. Theyre very busy but their line was always full of food and we never had to ask for anything. I love Golden Corral I think some people have a narrow mindset before they show up at the restaurant so that makes the review turn out not so well. My family will always enjoy coming back its a great time to get away from the kitchen and spend some family time.

Today I believe has been the worse ever in eating at Golden Corral! We arrived at 335pm thinkers by we were going to have fresh food. Not so! The shrimp, fish and dried out sausage was cold and overlooked. Walked around to the steak station, people including myself didnt want steak or shrimp skewers because the grill was so nasty and dirty!!!! Then the chocolate fountain has been broken for a month. So, people are dipping in the bottom of the fountain with strawberries, marshmallows and RKT in watered down chocolate!!! This place should be shut down due to cold and old food sitting at a buffet that charges $13.99/ adult $5.39/child and not to serve the consumers the best every time the doors open. Fire the managers and start fresh Gilden Corral 4910 Dressler Rd NW Canton, Ohio Store#0955 Yours Truly Nina

Not to busy for 6pm on a thursday night. Got my food and proceeded to eat a small piece of steak that tasted good and then I took a bite of the fried fish and felt something weird. I proceeded to pull the fish out of my mouth along with an eight inch long black curly hair that was cooked into the batter on the fish. I instantly lost my appetite. I showed the waitress who looked shocked as she carefully carried my fish back to the kitchen. She was incredibly apologetic and refunded my meal without me asking and told me that they took the fish off of the Buffett. I wish I would have looked closer at it before taking a bite because it was obvious that a gigantic hair was cooked into it. Ugh never again. 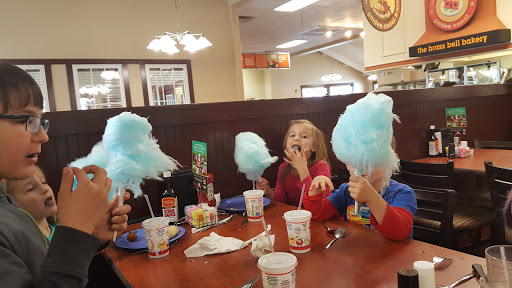 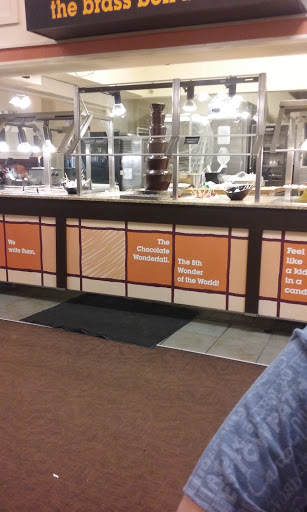 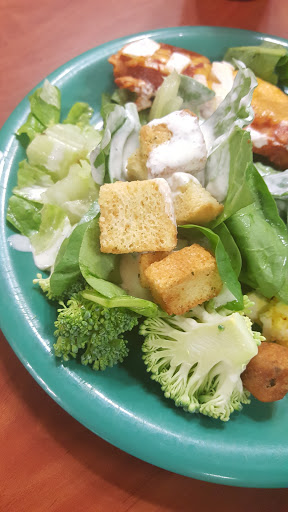 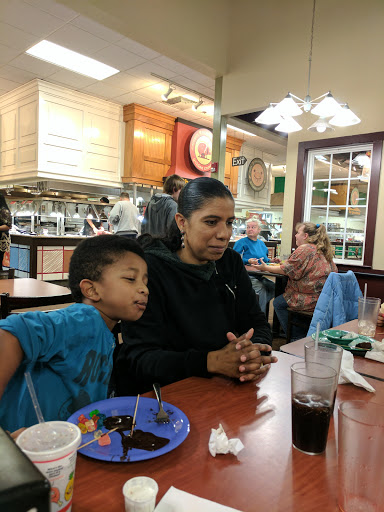 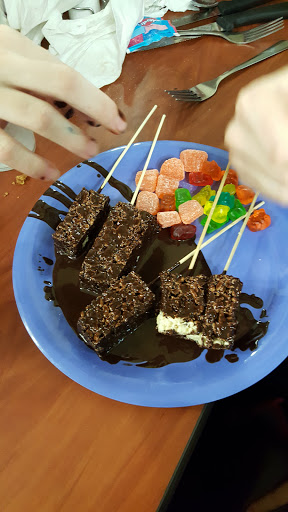 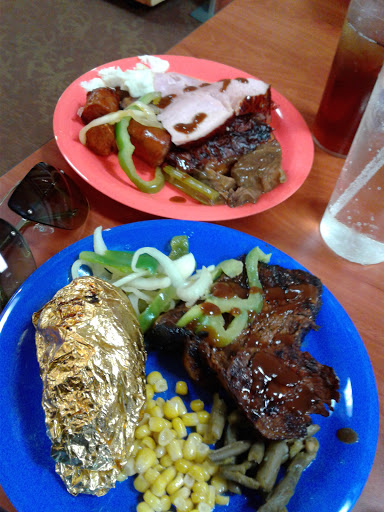 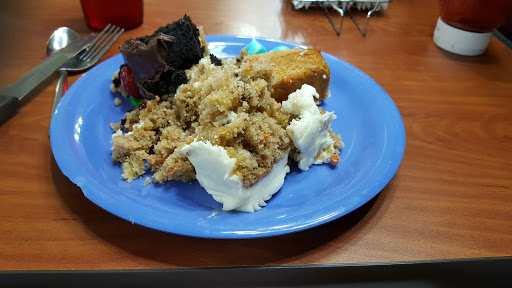 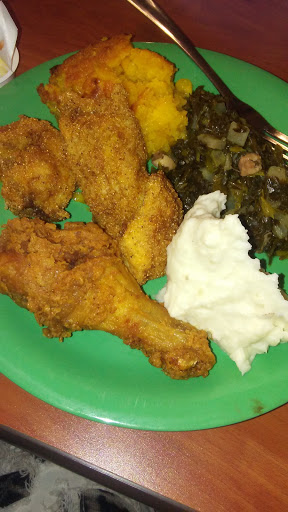 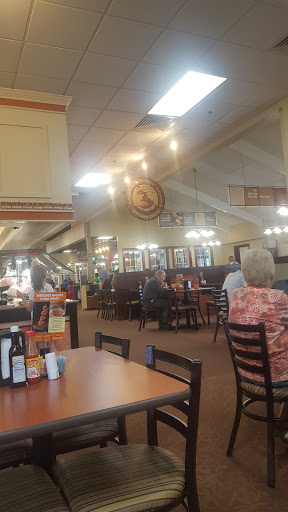