We visited for the first time after a long road trip. We enjoyed lobster fest. Jose was an awesome waiter. Very kind. We found a rubber band in my pasta. Jose explained it probably came from the lobster claws. He took it from my plate to show the manager. I explained how dangerous it was with latex allergies or just ingestion in general. He came back and said his manager said I could have more pasta or a dessert. I explained to him no comp was needed just the need to be careful in food prep. Jose was very apologetic. I expected the manager to address the issue. This should have never been put on our poor waiter. The manager was 3 feet from our table in the Kitchen. He never addressed it. Also if you go at 5:00 it is cooler. If they seat you near the kitchen and as it fills up with people it WILL GET HOT! GOOD FOOD, GREAT JOSE, MANAGER NEEDS SOME PEOPLE TO ADDRESS HAZERDOUS ISSUES

I got the walts shrimp and they were not very good! Seemed to be frozen pre breaded. You would think that a sea food restaurant like Red Lobster would have been fresh hand breaded. The bake potatoes were old and had to send back, lucky they just had fresh one come out of the oven. The salad was not that good either! My daughter got cheese sticks they seemed to be from frozen bag. Bathrooms not clean, and the whole restaurant had a funky smell. Wish I would of ask for my money back! Now the waitress was excellent! Was very intentive was on top of everything. Noticed my wife needed more dressing. That I needed more butter, water. With out asking she asked us if she could get us some more. Wish I could remember her name. Her and the biscuit was the only thing good.

What a night!! Mixed emotions and had to calm down before writing this review. I dont blame it all on the waiter but what a horrible experience. Crabs were over cooked. Presentation of the other dinner plates were to be desired. Dinner took forever and i mean approximately over an hour after ordering. No team work. When i asked another waiter for a to go box because my assigned waiter wss busy she acknowledged but walked again by the table after 5 minutes and did not even look our way. I had to actually get up and ask the hostess. I do not go to red lobster often and now i know the reasons why. Hope someone else has a better experience and was just not the best choice to take my daughter and her friends for her birthday to this location. Thank you!

We called around to several places to see if they could accommodate a large party (half birthday party/half family reunion and they only place willing and able was Red Lobster! They were awesome. The food was great as always, the waitress - wonderful. They helped with the cake (we left the candles in the car!) and sang Happy Birthday to the birthday girl. I cannot thank these people enough for doing such an outstanding job working with us as we coordinated with several people coming in from differents parts of the area outside San Antonio. The waitstaff was excellent as they were attentive and yet hung back when necessary to allow us to "reconnect." Great food, wonderful service and I think they gained a few new customers!!!

My friends and I came here for a quick, late night bite to eat. Once we sat down, we realized the restaurant closed in 30 minutes and felt like we were being rude for coming in so late. We told our waitress this, and went it leave but she insisted we stayed. We thanked her for her kind service but left anyways. The point of this review is to point out how nice the whole staff was to us, despite us coming on right before closing. It was honestly really cool and they even helped us locate some keys we left there later on. Havent tried the food, but customer service is half of the experience and they aced that!

Not sure if they are under new management, normally I like the service, however this day sucked! We were seated right away, but the food took a long time to get to us, and the waitress did not come back to refill our drinks or biscuits at all! It was 40 degrees outside and 20 in the restaurant, needless to say our food got cold quick. Took an extra 20 minutes to flag down the waitress who went MIA, especially for a slow afternoon, and to top it off, when she returned with my receipt for a signature she did not bring back my card! She had to look for it! Not visiting this location again.

Towards the end of our dinner a waiter threw a dirty napkin from the floor over our table while we were still eating. It gets better my husband had to step out to take my step son to his mother and he was told he would not be allowed to come back inside because they were closed even to pay the bill. The manager was called she promsied gift cards 3 weeks later and still no gift cards. The service was terrible there additudes were terrible every thing about them was terrible. It was was sons with birthday. All they did was take some money off the bill.

Garbage service.and food. Only went because I had 3 employment anniversary gift cards and was extremely disappointed. Lobster was touch and steak was inedible. Stuffed mushrooms tasted like ground up asprin. I couldnt understand why they tasted like medicine. Worst experience ever at a red lobster. My 3 sons and wife didnt like the food and constant awaiting service between the wife and husband that were coserving. Husband offered me a birthday dessert on the house but yet I still had to pay for it. Do yourself a favor and avoid at all cost.

My husband and I just had a date night here for lobsterfest. Despite it being packed, we only had to wait about 20 minutes. We had AMAZING service from our waiter Daniel despite it being super busy on a Friday night. The manager was very nice too and checked on us and the food was delicious. We live closer to the Walzem location, but well be back to this one again thanks to Daniels awesome service. Update: We just came back here again today, 1/8/17, and had amazing service from Gabrielle. This Red Lobster rocks!

It was my first time at a Red Lobster and I absolutely loved it. The endless shrimp was delicious. I thought you could only get more of whichever two types of shrimp you ordered however I was happy to find out you can get a refill of any of the six shrimp dishes on the endless shrimp menu. If you have a big enough appetite you can try them all. The Caesar salad was also very good. Id recommend the endless shrimp over their shrimp plate as you can get the same dishes as the shrimp plates but for less money.

Super friendly and fast service even with our large party. The special deadliest catch drink wasnt served in the cool glass or with the garnishes as pictured (part of the experience in my opinion) but it was tasty. My only complaint is that my Bairdi crab was over cooked. In an odd way though. The little amount of meat in the ends (the section past the pointy tip) of each leg were dry as a bone like jerky while the rest of the meat, though still obviously overcooked, was edible enough. 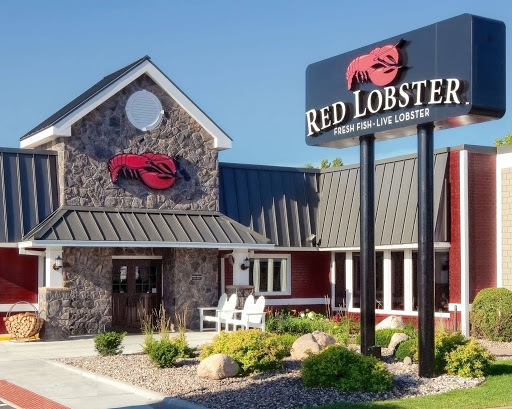 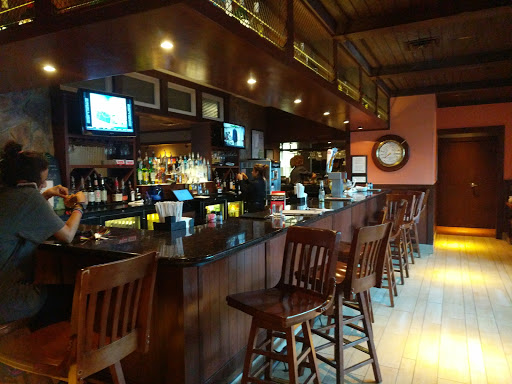 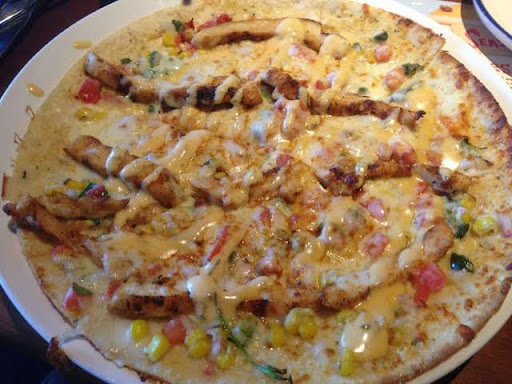 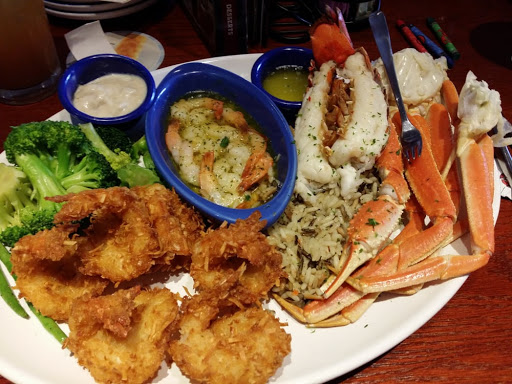 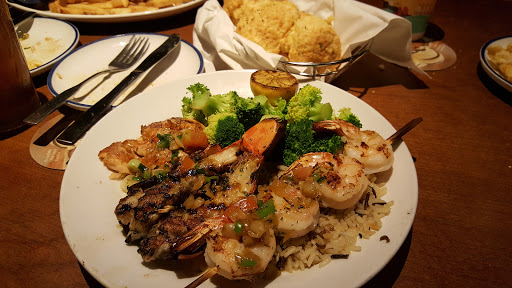 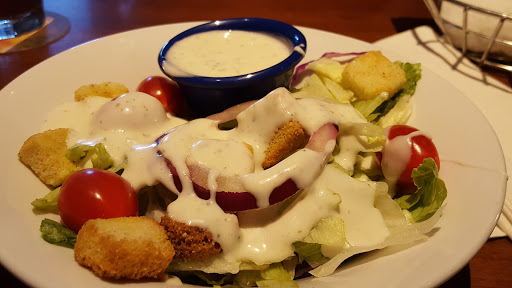 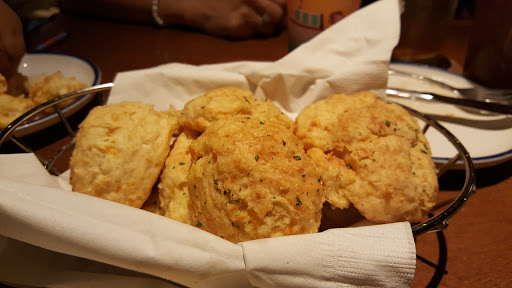 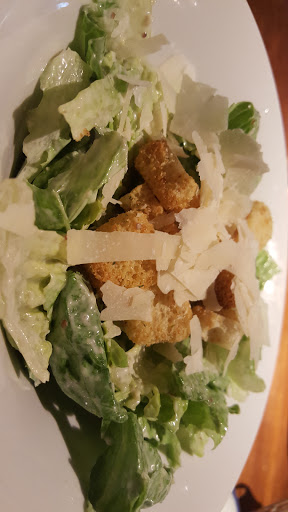 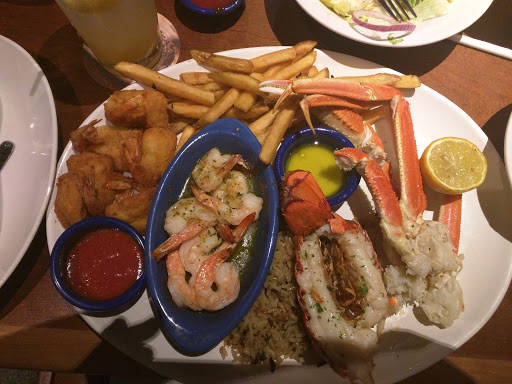 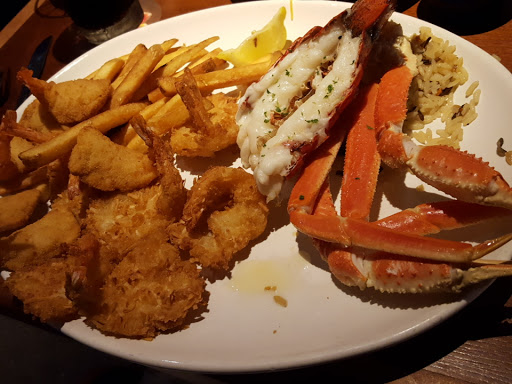 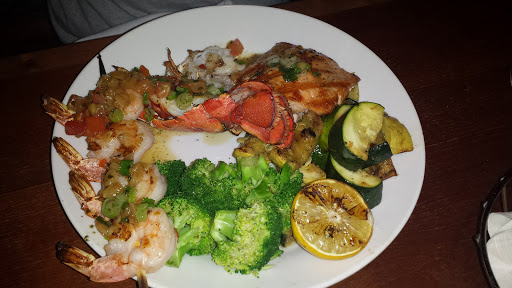 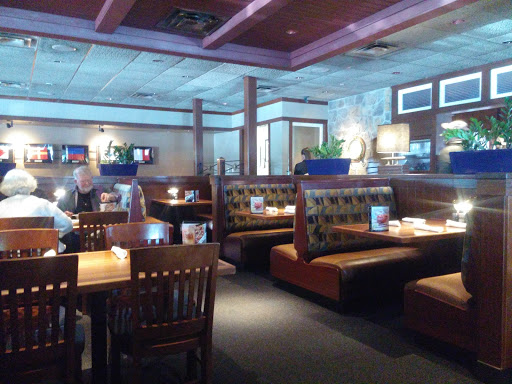 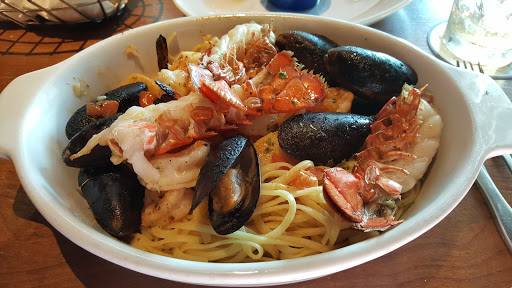 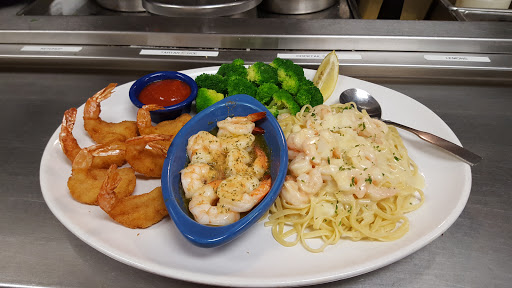