My first experience at this bar with food was four hours long, for one meal. After the hostess crossed our names off because she forgot we were waiting at their outside bar, we ended up waiting 2 hours from door to chair. After another 30 minute wait for water and menus and another hour wait for our food which was all wrong I finally complained long and loud enough to get my 20 dollars back and a 50 dollar gift card. This was the only positive part of the night. I just returned home from spending some of the gift card on a pick-up order and I could not wait to write about how badly they messed it up this time. The order was "Anthonys chicken sandwich with onion rings and Macn cheese/breadstick add chicken, comes with soup." What I received was a sloppy mayo drenched over cheesed ham and Turkey club with soggy fries. They got the soup and Mac with chicken right but no breadstick. Honestly the chicken is pretty burnt I and it just tastes like powder cheese mix. If there was a zero stars button Id hit that because one star describes fat boys of lapeer and bullfrogs doesnt even compare. Im only going to return to this place one more time to spend the rest of the free gift card, probably on drinks. I would never recommend going to this sloppy crummy biker bar to anyone.

Not bad, not good. So, I would have rated this as 1 star, but Monday night, when we were there, they had designated "Motorcycle parking". My wife and I were on the scoot, so an extra star. Service was poor. I had to go ask for a waitress after visiting with friends for 30 minutes. When one finally came she said "this isnt my table, but Im going to take care of you". Well that was a stupid thing to say, IMO. I still gave her the benefit of doubt and left her a good tip. This place may have a management issue. Service was sub-par. Wife got the fish, she wasnt impressed. Our friend got the 99c Monday Taco special. He didnt like them. I got the Chicken Fajitas. I liked them okay. The veggies were not cooked as well as I prefer, but thats their style, I assume. The flavor was average, but there were ample portions. Almost enough for two, but I was really hungry that night and polished them off myself. Maybe this is more of a bar for the younger crowd. But the patio view of the lake was nice. We will likely not return here. Too many better choices for our style of dining. We thought the patio was the high point. But I went there for a good meal. They missed the mark, for my taste.

This place is terrible. Four of us went last night and I was embarassed that my friend drove from Rochester to eat there with us. The Beer was flat....twice. The service was terrible....the whole time We ordered a chicken wing appetizer and it was boneless, which we didnt order. It was also burnt. My friend ordered an $11 chicken sandwich and it looked burnt as well. I would rather have a McChicken by the looks of it. My upcharged French Onion soup was nothing but mush. The waitress told us that it was happy hour and large beers were $3.25...but when the bill came they were all $4.25 (For large flat beers) My Wife didnt get her salad until the main course was on the table. When these issues were brought to the manager nothing was done about it. I will never go there again and I will never let my wife choose a restaurant again...so I guess something good came out of it. Bullfrogs, you suck. You should literally be embarassed.

Went there last night for dinner. The food was good but the service was HORRIBLE! It took forever to get our first beverages which was one water and one cocktail. We had to flag our waitress down every time we needed refills. Ordered an appetizer of chips and salsa, over 20 minutes later it was delivered to our table, then less than 5 minutes later we received our entrees. We watched our appetizer sit in the pick up window while our waitress was carrying on lengthy conversations at other tables. When you flag someone down for service or go up to the bar to ask for something, you are treated like an inconvenience. My guess is, you need to be a regular customer to get half way decent service. Definitely not worth the 20 minute trip to get there. Will not go back and will not recommend to others. They need new management and an entirely new staff.

I gave it two stars instead of one because the food was actually ok. Our issue is with the service. After an ok meal we paid the bill with cash. My wife only had $80 in her purse which she put down to pay with. I included a few extra dollars for the tip. The waitress took the bill away and came back saying we only gave her $60. We knew that wasnt correct because we counted it several times and knew exactly how much money my wife had in her purse. Our word against hers unfortunately. Hope the extra $20 you ripped us off on was worth it as we wont be back and will tell everyone to stay away.

just got back from bullfrogs in Ortonville. terrible experience. we sat out on the deck and the lawn service was mowing. we could not even have a conversation and the smell of the fresh mowed grass was overwhelming. when we got our food the flies were so bad we decided to move inside big mistake. the flies in there were worse. we spoke to the manager and he offered us a free dessert. big whoopy deal get rid of the frickin flies. when we got our bill nothing was itemized. it was suppose to be "happy hour" but we dont know what we paid for a beer. needless to say we were not very happy

AWFUL! Took my family for dinner (5 of us). 25 minute wait. Not because there was a line or no empty tables - the place was half empty and there were plenty of clean, empty tables. They told us they just seated another party (looked like 8 or 10) and were too busy for us right now. WHAT? So they just left us standing there. Kids wanted to try this place so, against my better judgement, we stood in their lobby for about 25 minutes. When we finally get seated, the service was slow and the food was bland. Never again.

Went there for a late lunch...seated near the kitchen (that was ok). Saw food being piled up at the kitchen window...took forever for the wait staff to get it out to the customers. Asked for condemns...never got them. Got up and got them myself. The food warmer above the kitchen service window is so full of dust it looked like a Chi-Pet. Food is ok. Short staffed it seems during busy hours. Food on the floor being trampled on...eh...the place looks cool. Needs better organization.

The onion dip they have is wonderful, I come here for it. I have always received it in a dip bowl with home cooked kettle chips. Today I came in with my family while my brother was in town and it came out in a two ounce soufflé cup? Coming from the restaurant industry that container is used as a side of sauce such as a dressing for salads. This is not how you present an appetizer you are charging 5 dollars for and I am told that is the normal portion!? 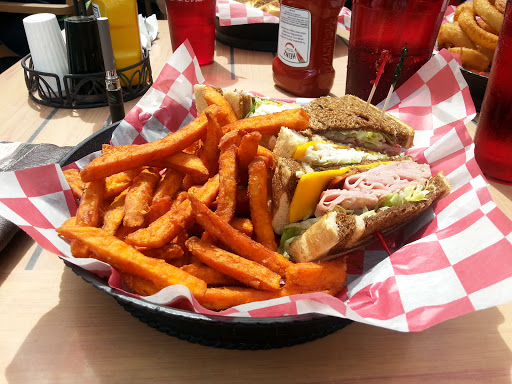 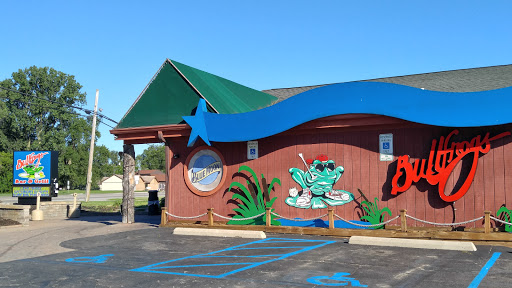 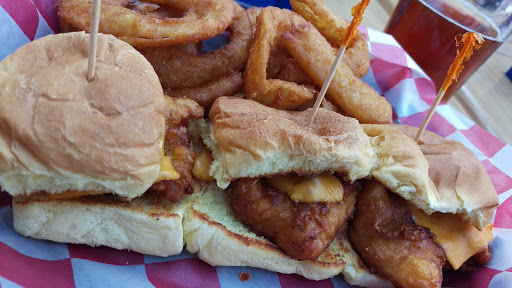 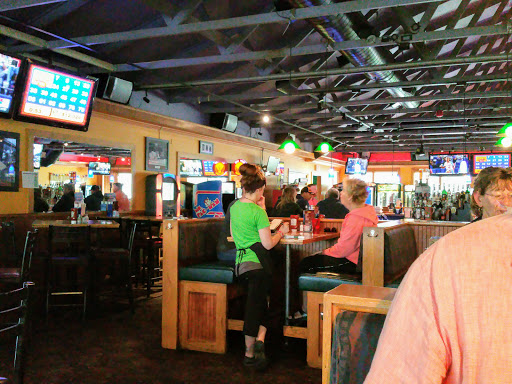 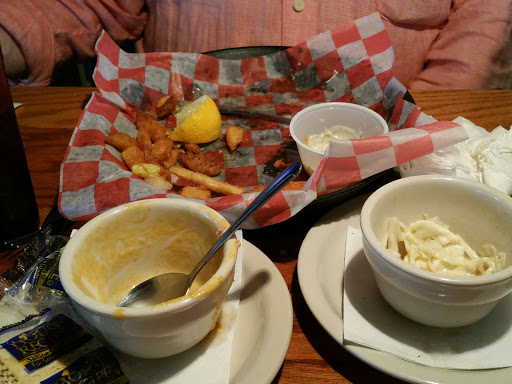 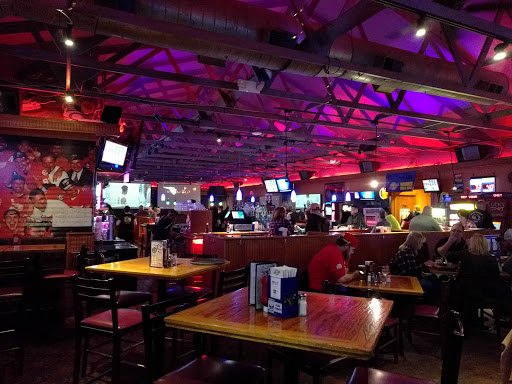 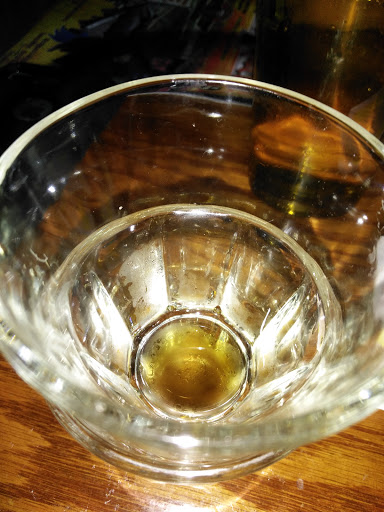 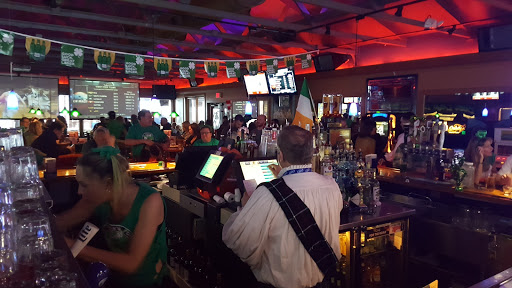 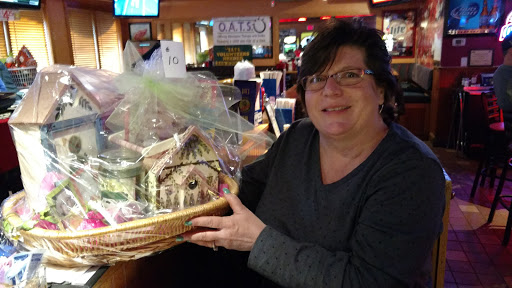 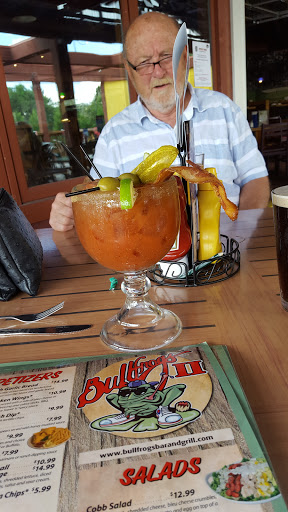 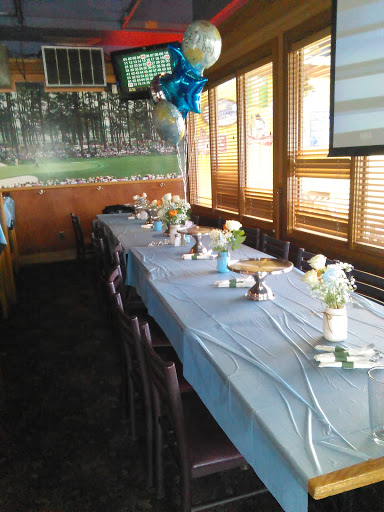 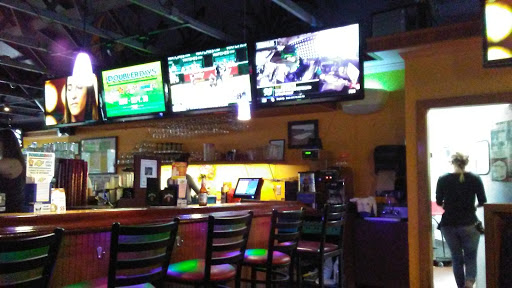