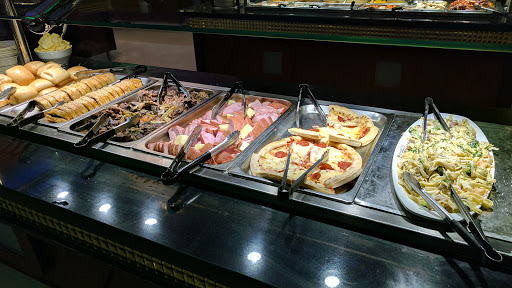 Food was good, but the waiters/waitresses would upright ask you for tip. The bill came, and we gave her money, she asked me if she could have the change. There was more than enough in change for tipping, so I told her no. She looked displeased with this, and came back with our change. When we were packing to leave, she noticed that the tray was empty and we were not going to tip, she promptly said, "I give you good service you give me tip, okay?" (January 21st, 2017) pointing to the tray that our fortune cookies came in. The service wasnt that good to begin with, it was just them clearing our table and refilling our drinks. She continued to stay there until we have left, most likely waiting to see if wed tip or not, ignoring the other tables that she could have waited. We purposely spent a good while putting on our coats and readying our stuff, but she was still standing at the end of our table waiting for tip. My sister left her $2.00 just to get her off our backs. When she saw this, she turned to another waiter and spoke in Chinese, probably telling him what "cheap" people we are. This has happened before too when I went with my parents in the past. The waiters/waitresses would walk table to table asking for tips. The other people felt awkward as well, and they tipped simply because they were put on the spot. When they got to our table, my parents didnt have the decency to tell them no either. We were a big group and my dad tipped $20 to her, she had the cahones to tell my dad that since we were a bigger group, we should tip more, we didnt and you could tell they were angry at us. She was demanding an optional payment from us, given that we didnt have to tip her to begin with. It was awkward being put on the spot in front of everyone. You either have to succumb to this stupid tipping rule, or be seen as an a**hole (because for some reason it is our job whether their employees meet minimum wage that day). Ive seen many reviews on here indicating this problem, and even seen the restaurant replying that theyd do something about it, but apparently not. Ive yet to have this problem anywhere other than here specifically. Judging from this behavior, the waiters/waitresses dont value their job that much, or their pay dont meet their daily wages seeing as how they feel the need to walk around asking, even resorting to demanding, for money. In both instances, the dining experience was good and hearty until the bill came and the waiters/waitresses start asking for money, which ruined the dining experience for the rest of us. The price, and the hope that theyd fix this problem is the only reason why I go back. Food is good, also very cheap for the quality of food, there are a lot of varieties ranging from Chinese, Japanese, American, and a grill where you provide your own ingredients and have them cook it for you. Service is just your everyday service that anyone can do, and expect to be confronted, even demanded, about tipping them.

I Have been to this restaurant three times my first encounter was great. The host and server were overly pleasant and not as rude as the second time I came. My first impression of this place was wow its nice because they have a chocolate fountain and a variety of ice cream choices but, when it comes to the food choices I would rate it a 3 out of 5 because sometimes the food is either cold or just looks like it was rushed to be done and Im talking about the sushi a few days ago I went there with my family and I grabbed a myself a plate of sushi and the rice on the roll was just messy. Also now I would like to talk about my second encounter, the host was rude and was just hostile towards my family. We came in and the host came she guided us a table and my dad was like hey can we sit in this area and the lady just rolled her eyes back and looked back at her notepad and ignored us guiding us to where she thought was a great table. So then once we are seated we ask for a booster for the child and she responds with another eye roll and doesnt respond. Then the lady goes on to say "what would you like to drink" all snappy and impatient excuse me, just because you are not in a good mood it doesnt mean you need to be rude. Also that earned us a another eye roll when we said we didnt want ice with our water. For the rest of the time we ate our food and I have to ask for the booster again because apparently the lady didnt want to do her job. At the end my family and I began to leave and there I saw the Hostesss on there *phone*. I mean talk about work ethics thats not appropriate and they should be welcoming there customers with warm smiles or at least a welcome hi but no just like how they treated us they treated the next customers with hostility and rudeness. I will probably not attend the Teppanyaki Grill & Supreme Buffet in FRIDLEY because of some of the rude and untrained workers. Also the food wasnt that great at all, I would even recommend McDonalds over this place not that my standards are that low but this event that happened is unacceptable it happened to my family and I even witness it happening to other customers. So unfortunately, the Teppanyaki Grill & Supreme Buffet in FRIDLEY you guys lost another customer. My advice to the restaurant in Fridley train some of your employees please and hire people who love what they are doing or are dedicated and committed to the job. Also I understand that everyone has different ways of showing there manners and I understand busy hours but nope it wasnt even rush hour that this happened. So bad attitude earns you nothing. Have a nice day!

"What...is....that...smell!?" — I went there recently under the impression that it was going to be great. A number of my friends and neighbors spoke well of Teppanyaki Grill. Maybe I went on an off night, but I wasnt that thrilled. First it was the smell — besides the overwhelming scent of smoldering cigarette butts RIGHT OUTSIDE THE ENTRANCE. A couple of those cigarette butt towers would go a long way to make walking up to the restaurant less offensive. And then when I walked in, it was this overwhelming stench of body odor and fish — ew? I dont know if the B.O. was from the customers or the staff, but it was overwhelming and nauseating, only made worse by the prevailing stench of cooked fish. Add to that, there was this intangible greasy feeling in the air that seemed to coat my skin. I think they could use a lot more ventilation in that place. Finally, getting on to the food, I found it OK. It wasnt as good as people hyped it up to be. The sushi selection was good, and their variety of cooked foods was quite plentiful and in no short supply. But on the whole, it just seemed like this carpet bomb of average food. Of the dozens of different foods that I tried, nothing really stood out as being remarkable or noteworthy. In the end, I felt like the experience of eating there was more like a chore than a pleasurable experience. "OK, lets just get through this second plate of food so I can get dessert." If youre looking for awesome Asian-inspired cuisine, this is not the destination to be. Its average, pedestrian-level, buffet-style Asian inspired food for the masses. Its not special, its ordinary. Even the squid [and Ive had fresh squid before] was AWFUL — it was more like trying to chew a marinated bicycle tire that refused to give. On the whole, Ill eat there again if I must — if the kids and the wife beg me to — but Id rather seek out something else first.